The name of the copper smelting town Anyox (1911-1935) means ‘hidden waters’ and was owned by Granby Consolidated. This company started construction of the town in 1912. It provided all the houses with electricity, sewer, water, store and transportation and 2 years later about 3,000 people called it their home.

Copper mine
As the mine and smelter were put into full operation, rich lodes of copper and other precious metals (silver and gold) were mined from the nearby mountains. Granby Consolidated moved its copper mining interests here from Greenwood, British Columbia. Copper was mined from the Hidden Creek and Bonanza deposits and smelted on site. 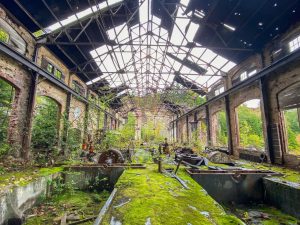 The company town was a very large operation with onsite railways, machine shops, curling rink, golf course and a hospital. In the spring of 1918, Granby Consolidated built the first wooden tennis court in Canada, for additional recreation. Still, the fumes of the pipes were very toxic and acid rain caused the trees to die. Some kids born there couldn’t believe that trees were actually green!

The end for Anyox
The Great Depression drove down the demand for copper, effectively the beginning of the end for Anyox. Operations continued but were steadily scaled down while the company stockpiled 100 million pounds (45,000 tonnes) of copper (three years of production) that it was unable to sell.

The copper mine shut down in 1935, and the town was abandoned. Salvage operations in the 1940s removed most machinery and steel from the town, and two forest fires, in 1942 and 1943, burned all remaining wood structures. A jungly forest has grown up inside and out of the concrete remains which makes the buildings even more eerie. The most amazing things to explore there now, are the old powerhouse, the dam and the graveyard. 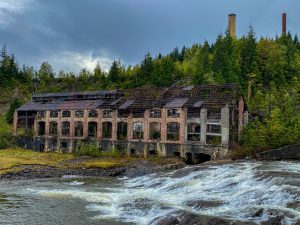 Constructed in 1911, Powerhouse No. 1 was the heart of the mining and community operations. It provided electricity for the smelter, machine shops and other mining operations, as well as the town, until the mine closed in 1935. The building is situated adjacent to Falls Creek on the shore of Granby Bay in Observatory Inlet.

Secondary powerhouses and substations in the mine site produced electricity for the ore-haulage railway trolleys and other equipment. Constructed of brick and steel, the building’s concrete foundations are laid on solid rock. The bricks came from Sidney Island and, later, the Anyox brickworks.

The building is a massive yet elegant structure with a large unobstructed interior space. Ten bays with curved window openings along both sides contribute to the impressive facade. A 15-ton crane, used to move the machinery, runs the entire length of the interior of the building.

Sophisticated
The electricity produced by Powerhouse No. 1 enabled the maintenance of a thriving and sophisticated company town despite the remote location. The building is further valued for the vestiges it contains of early hydro-electric technology related to the mining industry, as well as for its relationship in design, materials and function to the Anyox dam, the source of water for the Powerhouse.

The steep hill behind the building was optimal for the location of the penstock coming from the dam and reservoir. Granby Bay itself is a deep-water, landlocked bay and Anyox became a northern terminal for the three main Coast steamship lines. The building’s location continues to be important today; Powerhouse No. 1 is currently proposed for rehabilitation as part of a revived hydro-electric generation site at Anyox.

Scientific value
The native vegetation immediately surrounding the building has scientific value as an indication of the regeneration of nature after the devastation caused by the sulphur gas emitted by the smelter, which destroyed the original flora and fauna on the site. There is also scientific value in the physical and technical relationship of this building to the five ore bodies associated with the Hidden Creek mine, located a mile from tidewater and at 900 feet above sea level.

Powerhouse No. 1 has social and cultural value as a place of nostalgia and memory for people who once worked there, and for their families who have heard the stories of this place. 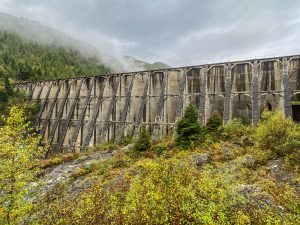 One of the highlights is the trip up to the Anyox Dam or Dam #2 as the residents called it (there was another, smaller dam downstream). The dam is about 4 km up a winding road that eventually drops down to the site. It is a truly awe-inspiring moment when you come around a corner and see this massive concrete structure located in a small valley.

Concrete pioneer and dam engineer John S. Eastwood designed this hydroelectric dam and it was completed in 1923. The dam was built by hauling pallets of concrete bags up a single gauge railway line operated by electric hoists. The dam is 635 ft long and 137 ft high and 28,000-acre ft of water capacity.

In 1923 before the dam was completed, heavy rains caused a landslide above the dam and the debris from the slide plugged the penstocks and the water level rose to dangerous levels so much so that they had to evacuate people living in the lower parts of Anyox below. The water eventually subsided, and the dam was completed. 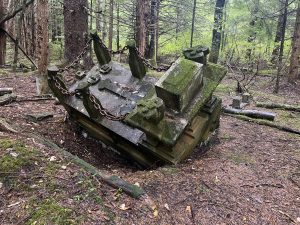 The graveyard is overgrown, hidden between the trees, but most of the graves are intact. According to The Alice Arm and Anyox Herald (1921-1935) newspaper files, cumulatively Anyox accounted for 480 births, 320 deaths and 160 marriages between 1914 and 1935.

The sulphur from the smelter created an environmental disaster and probably is the cause of the disproportionate number of new-born and still-born deaths. It was generally found that there are no BC Registration numbers for young deaths. The 1918 Spanish flu pandemic is evident in the number of deaths at that time.
Granby Mining Company made a promise to veterans they would receive a proper burial and they didn’t forget about them when they came home from the war. To Armistice Day, 1932, there are 12 interments of veterans of the Great War.

How to get there
It is quite hard to get to Anyox. You can get there either by sea plane or by boat from Prince Rupert (140 km south). Or you can book a trip with Northern BC Jet Boat Tours (https://www.northernbcjetboattours.ca/tours/) between May and September. This exclusive trip will take you to Anyox, Kitsault and Alice Arm with an overnight stay. For a discount code, click here: https://olafincanada.ca/contact/.