Stocks Meadow was a hippie commune in the early 70’s, located somewhere near Kelowna. Everyone who lived there, hauled water from a pipe coming out of a small creek. There was no electricity or cell phones. It seemed ‘quiet’ country living, but it was more like surviving as remoteness, harsh winters and voracious mosquitoes were serious opponents. 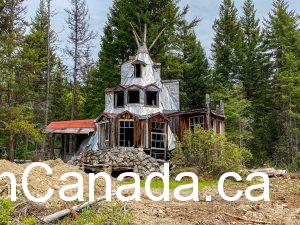 Teepee House
The Teepee House is the most recognizable and unique house of this ‘village’. According to a former resident, this house was built by a white fellow named ‘Yellow Bear’, who taught native spirituality. Yellow Bear made really cool wood carvings in the house. The stairway railing was a long curvy 2-headed snake.

Reverend Stocks
Stocks Meadow got its name from Reverend Philip Stocks. The missionary was born on November 7th 1854 in London, England. In the early 1900’s, a nephew of Reverend Stocks talked about the wonderful Okanagan. He described the sunny climate, with plenty of wild birds, big game, fish and available jobs in the growing town of Kelowna. The Reverend was so impressed with the description of this wonderful place that he established a camp on this 160-acre parcel near Kelowna.

In 1906 he set sail for Canada and in 1908 a younger brother came from Twickenham to join him. He sailed on the Empress of Ireland from Liverpool to Halifax, traveling across Canada on the Canadian Pacific Railway to Sicamous, B.C. From there he made his way through the Okanagan, with the last stretch using the steamship S.S. Aberdeen. Another brother followed in 1910 and opened a photographic studio in Kelowna. The reverend and his wife Emily had five children.

World War I
In 1914 the Reverend Stocks and his wife were on vacation in Scotland when World War I broke out. He was not allowed to return to his parish in the British section of Brussels. A weak heart and failing health, he decided to go to his sons in Canada. The steamship S.S. Sicamous brought the Reverend and his family back in Kelowna.  They had little more than their clothes, the rector’s vestments and some precious books. They could not get their furniture from Brussels, already occupied by the Germans. The American Ambassador in Brussels (Brand Whitlock) was a friend of Reverend Stocks and took charge of his cherished pieces of furniture during the war years. The Reverend, his wife and daughters spent the winter of 1914-15 in Kelowna.

Back to town
Following the advice of the well-known Dr. W.J. Knox, they moved up on the mountain across the lake, where their sons had built a comfortable log cabin for them. To reach the homestead, the Stocks family travelled north on the S.S. Sicamous from Kelowna to a place near Fintry, where H.B. Kenard had a small store and the post office.

The soil was cultivated and a vegetable garden was planted. They had a cow and some chickens. Deer, blue and willow grouse provided fresh meat, fish, and kokanees (in season) were plentiful in the bay down at the lake. Fruit was obtained from the orchards across the lake.

On July 28th, 1916 a severe heart attack brought a hurried Dr. Knox, who left his patients in Kelowna, up the mountain and he stayed a day at the bedside of his friend. Three days later his tired heart ceased to beat. His wife, Emily, died on May 1st, 1946, aged 89. 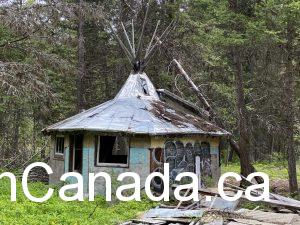 Hippies
Around the early to mid-seventies, Peter Legere purchased 40 acres of the original 160 parcel on behalf of himself and 5 other people. He originally met his partners in Hope, BC at a small craft shop just across the Fraser River bridge called The Shire.
Since Peter was the only one who had a legitimate job at the time, it was planned that he would buy the property under his name temporarily and sign it over to the Co-Op later. The original intent of the group was to file and get set up as a co-op, which never happened. Many of the group resettled in Kelowna, and as time passed, some of the “partial” owners gave tacit permission to others to “settle” on the parcel.

For more information and photos, check out this link from infotel.ca: https://bit.ly/3siZCOl.