Located in the beautiful Farwell Canyon and surrounded by dunes and hoodoos, an abandoned Chilcotin homestead called the Pothole Ranch can be found. When I visited it in June 2021, it was not known to me that it was private property (no signs or fences), but recently I received a message that this place isn’t open to public anymore due to liability reasons. 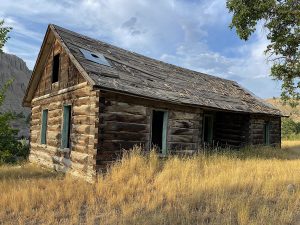 The Williams Lake Tribune (Barry Sale, December 2020) published a nice article about the history of this homestead:
“The land was first pre-empted by Louis Vedan, a Métis man born in Empire Valley in the mid 1850s. He worked as a packer and a ranch labourer throughout the Chilcotin before settling down on the flats next to the Chilcotin River in the late 1890s.

It was not a particularly welcoming location, with temperatures reaching over 38C in the summer as the sun reflected off the canyon walls. In the long, cold winter months, the steep, difficult road down to the place made travelling in and out almost impossible.

On the upside, there was always lots of water available, and the soil there could grow almost anything. The steep canyon walls created a sort of a greenhouse effect, and the crops were incredible.

In 1903, a young man named Gordon Farwell arrived in the Chilcotin. Nicknamed “Mike,” he had been born into a well-off English family, and he had come to the Canadian west to prove to himself and his family that he could succeed in “the colonies.” After some lengthy negotiations with Louis Vedan, he worked out an agreement to purchase the place in the Chilcotin River canyon.

It was Farwell who began calling his place “The Pothole,” since the location at times reminded him of living in a boiling cauldron. In 1912, Farwell formed a partnership with Gerald Blenkinsop, another young Englishman who had come to the Chilcotin and had fallen hard for the ranching life. The two had similar personalities, and there was an immediate connection, which developed into a lifelong friendship. 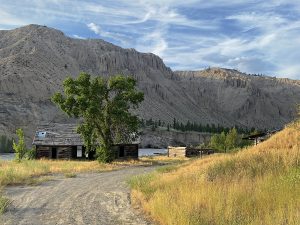 The main goal of their partnership was to raise and break horses, but Gerald also freighted up and down the Cariboo Wagon Road from Ashcroft to Quesnel. Eventually, both partners found wives and built separate homes on the Pothole flat.
Gerald married the woman who Farwell had hired as his housekeeper, Madeline Wheeler, who was known far and wide by the nickname “Queenie.” She was petite and full of energy with a quick wit and a friendly manner. Gordon married an Irish woman, Chris Riley, who was soon nicknamed “Weenie.” She was much more reserved than Queenie, but the two women got along very well, and there were no animosities.

Queenie had come from a musical family and was a very good pianist. Mean old Louis Vedan was so impressed with here bright and charming personality that he gave her a Heintzman piano as a wedding gift, and brought it down the steep, narrow road by wagon.

In 1919, Farwell and Blenkingsop sold the place to the Gang Ranch, which kept it in operation for several years as one of their cow camps. The two families moved to the Big Creek area, where they again went into partnership, built separate homes, and started over. By this time, however, both families each had two children.

The two men won the contract to carry the mail between Hanceville and Big Creek in the early 1920s, so this supplemented the income as the rebuilding process went on. By 1925, Farwell had had enough. He sold his share in the Big Creek operation to his partner, and he moved his family to Victoria. He only returned to the Chilcotin once for a brief visit. 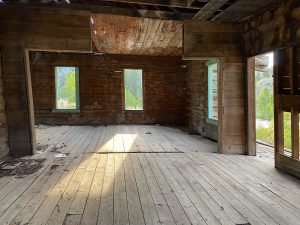 Blenkinsop went on to manage the Bell Ranch, later buying it outright. In 1948, he sold out to the Chilco Ranch, and he and Queenie moved in to Williams Lake, where they lived until his death in 1969. Queenie stayed on, eventually moving into the Cariboo Park Home where she stayed until 1992. Her family then moved her to Victoria, where she passed away four years later at the amazing age of 106.

The Pothole Ranch homestead was abandoned after the Second World War. Some of the original buildings still stand, and from a distance, the place looks quite serene and picturesque.

It’s still hard to get down to the original ranch site, and the place is still an oven in the summer and a freezer in the winter. The old structures are a testament to the toughness and the tenacity of the pioneers who once lived there and for whom the canyon is named.”