The Tallheo Cannery is one of the last remaining fishing canneries on the Northwest coast. It can be found at the end of the North Bentinck Arm across from Bella Coola on BC’s west coast, with snow-capped mountains in the background. 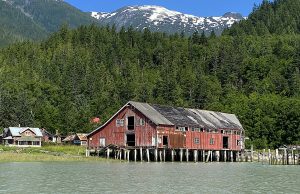 The cannery was started by the Norwegian immigrant B.F. Jacobson in 1905 and was later owned by the Canadian Fishing Company. In its heyday Tallheo was a community of 300 people, all working at the cannery.

The Tallheo Cannery is now owned by Garrett Newkirk. His dad worked at the salmon cannery until it closed in 1979. Then he bought it with all the buildings and the original equipment in it and opened it up for tourists to do walking tours, visit the shop and office or stay at the 1920’s guest house.

A lot of the buildings were in bad shape and had to be torn down. The original cannery was at least twice as big, but part of it collapsed in the 90’s. What is left of the cannery has been (and will be) restored over the years. Everything is still there as is!