Tranquille is a well-known psychiatric institution near Kamloops. Trespassing is strictly forbidden, but I took my photos using fancy zoom lenses. The information below is from an article from infonews.ca (July 2019).

Tuberculosis
After colonization, tuberculosis (tbc) began ravaging Canadian communities, especially First Nations. In 1867, tbc was the leading cause of death for people in Canada. In the 1890s, two ranches belonging to the Fortune and Cooney family began taking in consumptives as boarders. They allowed those infected with tuberculosis to live in small cabins or tents on the property and care for themselves as long as possible.

The tuberculosis hospital was opened on November 28 of 1907, officially called the King Edward Memorial Sanatorium. At the time, the patients were kept in the original structures, but the demand for more spaces led to an almost constant state of construction. By 1910, the hospital could accommodate 49 patients and employed 4 nurses and 12 attendants. Eventually, the sanatorium had 360 beds.

Alexandra Ranch
The property included Alexandra Ranch. The ranch grew food and raised animals for the sanatorium patients and staff and to sell it to the public. The farm grew and became a source of revenue through meat, dairy, and vegetables. It continued to operate even after the closure of the sanatorium.

Tranquille had its own newspaper, the Tranquillian, which was run by patients. Many of the staff lived on-site, formed relationships and started families. Their children went to a small schoolhouse during the day. About half of those admitted to the sanatorium paid for their own fees. Back then it cost around $55 dollars per month, and the average stay was for 200 days.

Sanatorium, hospital and psychiatric institution
The older buildings were torn down and replaced throughout the years. Construction continued while the sanatoriums’ population continued to grow, with many World War I soldiers returning with the disease. When anti-tuberculosis drugs were introduced in the late 1940s, the dynamics of the hospital changed greatly. Sanatoriums soon became unnecessary, and the hospital closed in 1958. After the sanatorium closed, the province used the property as an institution for people with mental disabilities and illnesses. 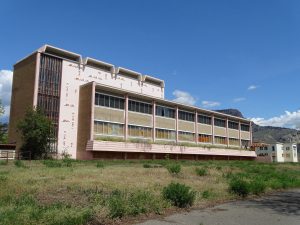 Closure
On July 19, 1983, 40 union workers of the 650 staff protested the closure, occupying the buildings for three weeks. The 324 patients still at the centre were transferred to community care, family homes, or other institutions. After the closure, the location briefly became a detention centre for young offenders.

Today, some of the buildings that served purposes for the sanatorium still stand. The same location is now known as Tranquille Farm Fresh, which offers guided tours, tunnel escape rooms (tunnels were mostly used to transport laundry and other goods), and seasonal events. Depending on the Covid-situation, they will open again in the Fall.

How to get there
Tranquille is northwest of the city of Kamloops. Just follow the Tranquille Road past the Kamloops Airport (YKA) until you can’t go any further. Like I said, it is private property, so you can either make photos with a zoom lens behind the fence or you can go to their website (https://bit.ly/3gjkoe6) to see if you can book a tour or escape room.