Bradian, a suburb of the town of Bralorne, was built in the 1930s during the South Chilcotin gold boom. It grew into a community with roughly 60 houses during a period when between 5,000 and 10,000 residents lived in the valley, which is still home to a handful of small, remote communities such as Bralorne, Gold Bridge and Gun Lake. But Bradian was abandoned in 1971 when the nearby gold mines shut down. 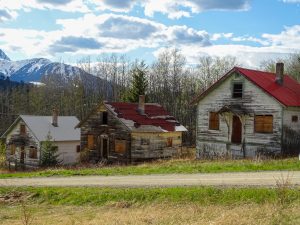 What is left?
The ghost town still has 22 buildings, including several houses, on a single 50-acre plot that still has basic infrastructure such as hydrants, hydro power and telephone lines, but the buildings are in disrepair and serious upgrades are needed.

In 1997 a family bought the town and did some upgrading on the roofs and did some painting. A few years back it was sold to a Chinese company for 1.3 million dollars, but the future of Bradian is still unknown. See also: https://www.southchilcotin.ca/bradian.html.

How to get there
Just north of Lillooet, follow the Bridge River Rd for about 30 km and then turn left onto the Carpenter Lake Rd. This road winds around Carpenter Lake for 50 km until you’ll reach Gold Bridge (43 inhabitants and a gas station!). Turn left on the Bralorne Rd through Gold Bridge. This road will turn into the Lillooet Pioneer Rd all the way to Bralorne and Bradian. You don’t need a 4×4 to get there, depending on the season.