Sandon silver mines were collectively the richest in the province during 1892-1900. Following the 1891 discovery of silver by Eli Carpenter and Jack Seaton, thousands of prospectors sought the rich deposits of silver-lead ore.

Sandon was incorporated on January 1, 1898 and had more than 5,000 residents. At the end of the 19th century, facilities in the fast growing town included a large curling arena, hockey rink, two ski hills and venues for lacrosse, soccer, baseball, lawn bowling, cricket and tennis. Indoor facilities included a bowling alley, billiard halls, and a gymnasium. Sandon was the first fully electrified town in BC. The name derives from Sandon Creek, which acknowledges John Sandon. Smaller communities like Three Forks and Cody appeared on the map after Sandon.

Decline
In 1900 a big fire destroyed 75% of the buildings. Sandon faded with the silver prices. On top of that a massive washout of the Carpenter Creek destroyed most of the remaining buildings in 1955.

Railway competition
Two different railways raced to reach the town first. The Kaslo & Slocan Railway, owned by the Great Northern Railway, connected Sandon with Kaslo, on Kootenay Lake. The Nakusp & Slocan Railway, owned by the Canadian Pacific Railway, connected with Nakusp on the Upper Arrow Lake, and the Slocan Lake ferry at Rosebery. On the railway arrivals in 1895, the rivalry escalated into sabotage. The final passenger train ran in 1933. Damage from the 1955 floods on Carpenter Creek ended all rail traffic to Sandon.

Locomotive #6947
One CPR Locomotive #6947 (originally #1737) can still be admired in Sandon. This train was built at the Montreal Locomotive Works for the CPR in 1908. From 1926 to 1928 it worked in the CPR’s Kootenay Subdivision. After that it was converted with a different engine, renumbered to #6947 and served the CPR in the Winnipeg and Moose Jaw yards until 1959. Then it was sold to the Manitoba and Saskatchewan Coal Company hauling coal from the mines. It was retired in 1967 after six decades of steady work in Western Canada. 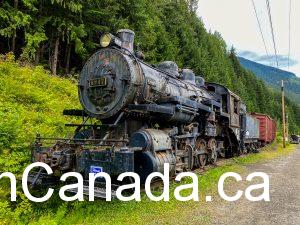 The engine was acquired by the Alberta Pioneer Railway Museum in 1970 and moved to Edmonton. In 1998, Wrightway Charter Co. Ltd of Sandon bought it, to bring it back to its current location as a permanent exhibit of an early 1900s Sandon freight train.

During WWII Sandon was used as a Japanese Canadian internment camp. Nowadays Sandon still has around 15 residents, a powerhouse, about 20 heritage Brill trolleybuses shipped from Vancouver in the early 2000s and a museum.

How to get there
From Revelstoke, take the Hwy 23 south to Shelter Bay. There you have to hop on the ferry to get to the other side of Upper Arrow Lake. Follow Hwy 23 south to Nakusp and then follow Hwy 6 southeast to New Denver. In New Denver make sure you turn left onto Hwy 31A towards Kaslo. This stretch is also called the Valley of the Ghost highway, as there are several ghost towns along this road. After a few kilometers on this highway, you can take a right on the Sandon Cody Road towards Sandon and Cody.